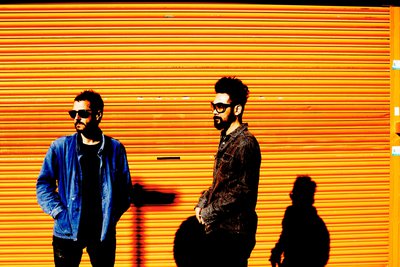 We are absolutely thrilled to announce that these giants of music have agreed to be 2022's Nibley Festival headliner.

Since they formed in Newport in 1994, enduring global artists Feeder have never been far from the charts with 9 top 10 albums and 5 million records sold.

Not only do they have a huge back catalogue of infectious rock anthems like ‘Buck Rogers’ ‘Feeling A Moment’, ‘High’ and ‘Just The Way I’m Feeling’ but new albums ‘Tallulah’ and next years keenly anticpated 'Torpedo' yet again justifies their spot as one of the best British bands.

Well known for  their crowd pleasing string of  hits, Feeder are ready to come full circle. More than two decades after their first show the band are reinvigorated, tapping into the essential, primal energy that first inspired them. As ever, Grant Nicholas leads from the front with memorable, imaginative lyrics alongside bass player and comrade Taka Hirose.

The celebrated, multi-platinum, rock band have hit a resurgent run of three consecutive UK Top 10 albums with 2016’s All Bright Electric, the 2017 Best Of, and 2019’s Tallulah.

Momentum has been something in short supply for many artists over the last 18 months. Feeder, however, have always been masters of marrying the light and the dark – illuminating the shadowy corners of their world to uncover something poignant and uplifting – meaning it was not long before conditions became a perfect storm for inspiration’s lightning to strike, and two albums’ worth of music materialised.

Fans old and new can expect entertainment, passion and quality from an iconic band that are masters of their craft.