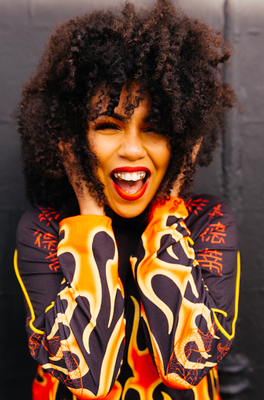 Big voice, big bass and big hair is what Singer/MC Eva Lazarus is all about!

Eva Lazarus tirelessly smashes through the festival season each year, including Glastonbury, Outlook, multiple packed shows at BoomTown culminating with an electric show alongside Gentleman’s Dub Club in the Lions Den.

Eva & her crew (‘The Afronaughts’ and DJ Chris Munky) are primed! They are packing a stage show jammed full of props and confetti canons and are ready to nice up the dance, whether its a rave, a club, a festival, boat, pyramid or the moon!

“Bringing you a blend of genres through a legendary voice Eva’s solo show is of shimmering headliner quality and we are deeply blessed to have her come and grace the stage with the edge she wields. ” – Bask Productions

“Eva Lazarus was one of our favourite acts of the entire festival: sharp, sassy, sexy, slick and hugely entertaining.” – Urban75.org

The Friday Renishaw stage headline slot will be on fyah!