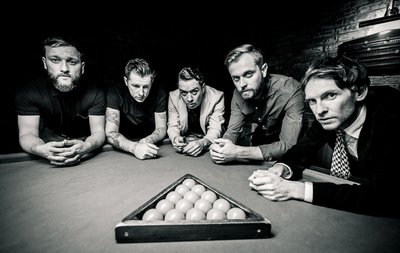 Influenced by The Specials, Public Enemy and The Clash, London collective the King Blues combine folk-punk, Two-Tone, and dub reggae with overtly political lyrical themes -- creating a sound they describe as "conscious rude boy ska" or "rebel street music". Fronted by the ever energetic Jonny "Itch" Fox the band have been stirring political consciences for over a decade with a rather clever trick of producing music that is at times angry, at times playful, sometimes anthemic sometimes whimsical....but never dull.

Support from the likes of the then Radio 1s Zane Lowe resulted in several hit albums and a flurry of headline tours and major festival performances - main stage slots at Reading and Leeds included. Apart from their politics you are going to find it hard to pin these lads down when it comes to their musical style (ukulele or electric guitar?) but it will be loud and you will definitely remember you were there!