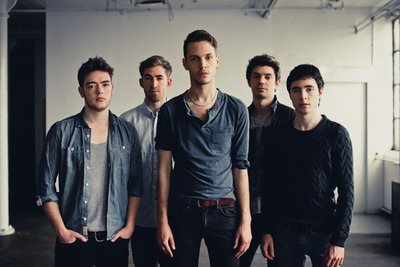 When a band is compared very favourably to Coldplay (even mentioned as possible heirs to the throne) you tend to sit up and listen. We did, and what a delightful surprise we had. Soaring, anthemic melodies that genuinely are up there with the likes of Coldplay, Keane and Embrace, are beautifully delivered by the band - not least through the gorgeously haunting and impressive vocal range of frontman Owen Lloyd.

The South London band have already been heartily endorsed by Steve Lamacq on 6 Music and Jo Whiley on Radio 2 while Longfellow were nominated Introducing Band Of The Week by Huw Stevens on Radio 1. They were asked by the BBC Introducing team to fly over to SXSW in Austin, Texas where they shared a stage with the likes of Royal Blood and Public Service Broadcasting. They've also supported Keane on stage.

At Nibley we like to think we can spot a great act but with Longfellow we might just be bringing you an early snippet of band that truly could become world-beaters. That's a big claim but just listen to the music - truly outstanding stuff!