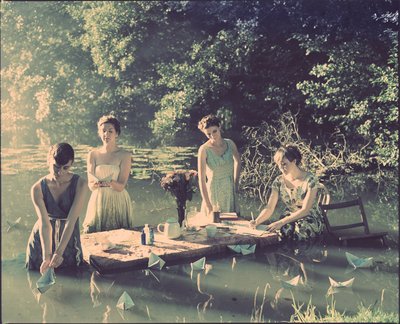 Well we've never had an Ivor Novello and Royal Television Society award winning artist playing Nibley before! Emily Barker and her band The Red Clay Halo won the accolades for the theme tunes for The Shadow Line and Wallander. She also sang alongside Frank Turner at the opening ceremony of the 2012 Olympics (on that funky hillside). This Australian born singer-songwriter just oozes quality with her lush vocals, beautifully crafted lyrics and memorable tunes. The fact that she has teamed up with a trio of incredibly talented musicians ensures the effect is an all encompassing sonic spa treatment.

The band's national tours are sell-outs with an ever increasing band of devoted fans and this is reflected by the fact that their music is often heard across BBC 6 Music, Radios 2 and 4. If you like a touch of Americana, Folk and mighty fine tunes then you'll love this band. As the BBC said "Working with the trio of Gill Sandell, Anna Jenkins and Jo Silverston – The Red Clay Halo – Barker adopts a point-man position for some wonderful four-part harmonies which envelop the listener, each vowel draped in the finest velvet." Enough said!