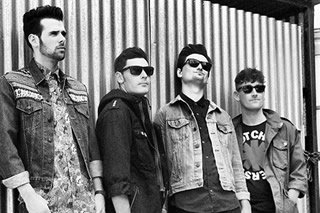 We know Nibley likes a band with a bit of an attitude and a desire to engage with the crowd. Well we’ve landed one of the bright new bands from the South East that fit the bill – 4 cheeky chappies from Slough whose music we’d describe as British Indie/Ska. No nonsense lyrics about everyday life are fused with rousing, sing along choruses and assertive guitar riffs. If you think early Jam you won’t go too far wide of the mark – a real urgency to the music but ridiculously catchy too. They have been promoted by BBC Introducing, who for all you music literati out there have form in unearthing real gems. They have also caught the attention of Doctor Martens who have sponsored the band.

Bottom line is they are great band bursting with energy – get on your boots people of Nibley and get stomping!