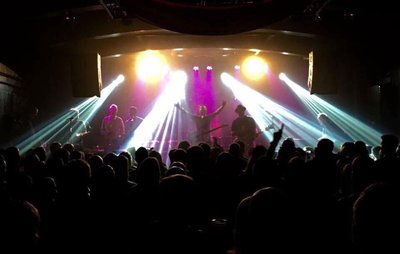 This is a group from the West Midlands that are going places. Their classy brand of upbeat Northern Soul lead them to supporting The Specials on their recent sell-out tour.  The tour took in some of the biggest venue's in the UK and brought with it some fantastic reviews. Their new album, "The Three Shades of Stone Foundation"  features US Soul singer's Nolan Porter famed in Northern Soul circles here in the UK for songs such as "Keep on Keepin' On" and "If I could only be sure" (later covered by Paul Weller), and grammy award winner Joe Harris, lead singer of Motown's The Undisputed Truth.  The tour and subsequent album have proved a huge success for the 7 piece band, with review's in the national press (The Daily Mirror - "4 out of 5 stars, imbued with the velvety magic and driving intensity of classic US soul") to national tv and radio, with a recent session on the BBC Craig Charles funk and soul show.
The band are set to begin their own tour of the UK in spring 2012. If you missed them playing with The Specials at the end of last year now's your chance to catch one of the best live bands of the moment.