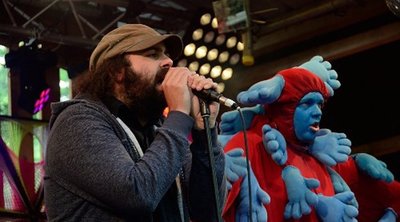 When you have band members who go by the names of Grandmaster Gareth and Erotic Volvo you know you are dealing with an act that can see the funnier side of life. Misty's songs typically consist of Grandmaster Gareth singing in a deadpan, maudlin style accompanied by lively guitar, keyboards and brass players. They occasionally include samples and toy instruments in their songs. Contrasting with Gareth's dour lounge-singer act is the dancer Erotic Volvo. Dressed in a loose full-body red sack with numerous stuffed blue gloves attached, and his face painted blue, he dances continuously and in an exhaustingly frenetic manner, often moving around the audience. He occasionally also performs as a human beat box. Musical style has been described as an eclectic mix of  jazz, lounge, psychedelia, two-tone, pop and punk so let's not try and pigeon-hole them shall we! Misty's are an all-out fun band to watch and are much loved on the festival circuit. Amongst their many admirers is Dave Gorman, the famous comedian and humourist - the DVD "The Dave Gorman Collection" features a special song and video as an extra. The song is titled "54 Dave Gormans". The band also provided the theme tune to his TV series "Genius". They have recorded sessions for the likes of  Stuart Maconie, Tom Roninson and Rob Da Bank as well as being featured many times on Radios 1, 2 and 6. Gryff Rhys Jones, Noddy Holder and Sir Patrick Moore have all featured in their work - what can we say - everybody likes Misty's! We've been thinking about having them at Nibley for a few years now so we are delighted that they have the chance to put a smile on all our faces in 2012.