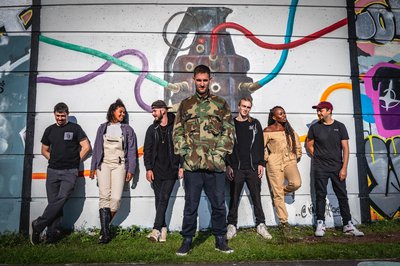 We are incredibly pleased to be able to welcome back Bristol's legendary Dr Meaker to play on the Friday.

Many will recall watching Dr Meaker tear up the Renishaw Stage in 2017. We are not sure we have  ever seen that stage blow up in such a big way. We have no doubt that they will do the same  on the Main Stage this year. They will once again put the "Dirt and Soul" into Nibley Festival to fire up the sound system.

They remain one of the hottest, if not the best live UK Drum N Bass dance acts right now. With the 9-piece line up, featuring some of Bristol’s finest musicians and vocalists, bringing incredible energy to the stage every time they perform. From nightclubs to muddy fields the band have stormed the stages of every venue they have played, earning them many accolades and awards, including winning Glastonbury Festival’s Live Act Competition.

The band continue to go from strength to strength with critical acclaim from the music press and support from BBC radio DJs. They were  contributors on a recent number 1 album and track in DnB/dance music charts. They have played innumerable festivals across the UK and Europe including Glastonbury, Boomtown and Pride. Leading them to being recently described as "literally the best live DnB band you will see".

This will be an uplifting, energetic and unique sound from a band at the top of their game, and absolutely on fire. With their addition to the line up Friday is shaping up to be one of the best parties for years.