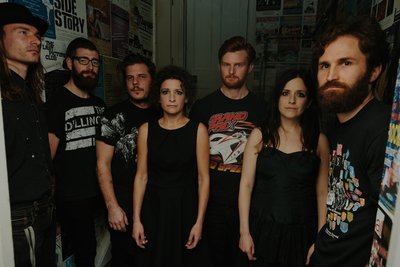 With ‘glorious folk-tinged stadium anthems’ (Record of The day) Flight Brigade is the coming together of two families. Lead singer Oliver Baines grew up on a farm in Ohio, before moving to the UK, where he first met fellow band member Miriam (now his wife) when they were kids. Her sister Dorry plays violin and joins Miriam in harmonies, the girls having been steeped in the 70′s British folk scene, thanks to their musician parents.

BBC 6 Music’s Steve Lamacq and Tom Robinson plus Radio 2′s Bob Harris and Janice Long (who described the band as astonishing, after playing a live session) have all championed the band to date. Flight Brigade were commissioned to compose the music for the Unicef World Cup campaign and have opened live shows for the likes of Dry The River, Stornoway, and Seth Lakeman. They’re now working towards a 2015 release of their debut LP with acclaimed producer Gavin Monaghan (Kings of Leon, The Editors).