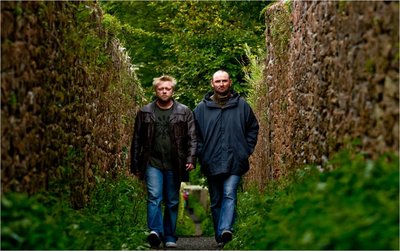 You'll know by now that we don't generally invite bands back to Nibley, not because we haven't had countless favourites over the years, but simply because there are so many great acts out there that we want to bring you. There are some bands though that seem to find a place in your hearts, and John and Wayne are one such act.

You saw them a few years ago as a two-piece but they have agreed to bring along some long time collaborators to give the Friday campsite a real party in the sunset. By day John and Wayne are two carpenters from Cumbria but they manage to weave the apparent ordinariness of life into magical, funny and incredibly catchy musical stories. It's true to say once a John and Wayne fan, always a fan. It's worth buying a camping ticket just to see them!