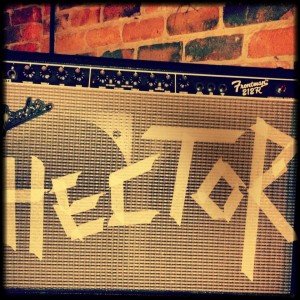 Hector really are a totally new band, having released their first tracks on the world in 2013. They mix a ’50s rock ‘n’ roll sound with Arctic Monkey style vocals and we have a feeling you might just like it. Within the space of a few weeks they were being heralded by Steve Lamacq, interviewed by NME and doing photo-shoots for Ellesse, and luckily enough for us we just happened to spot them at one of their first gigs and had a word.

A guitar and drum duo – songs about love voiced in the style of  Alex Turner but with a Derbyshire twang. If you don’t fall in love with the honesty, enthusiasm (not to mention the musicianship) of these two lads from Belper then we will eat our own Nibley “Kiss Me Quick” Hat!