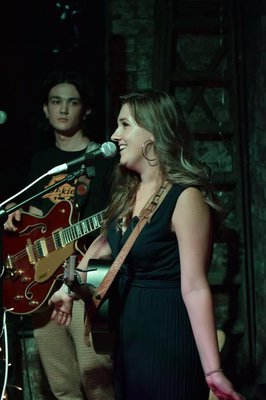 Zoe Newton is an alt-country singer-songwriter based in Bristol, UK. Zoe has used songwriting as a way to express her emotions and thoughts from a young age, using only lyrics and a guitar. Her intimate performance leads you through a stream of country-infused acoustic songs about love, life, and heartbreak. Zoe is making waves within the country scene. having recently been nominated for UK Country Artist of the Year at the UK Country Awards 2019.

Drawing inspiration from Lori McKenna, Miranda Lambert, Joni Mitchell and Sara Bareilles, Zoe incorporates a multitude of styles within her music to create relatable, heartfelt songs that just about anyone can apply to their own life.

Zoe's most notable performances include Bath International Music Festival, BBC6 Fringe Festival, Bristol International Balloon Fiesta, supporting Aston Merrygold at the Cheese and Grain, as well as appearances on BBC Radio Bristol, and a performance at the infamous Bluebird Cafe in Nashville

Zoe has released two EPs, Losing Sleep and If I Could. Both are available on all popular streaming and download platforms and physically on her store.

Zoe is currently working with Tonmeister Isaac Francis, producer of If I Could, on her debut country album.