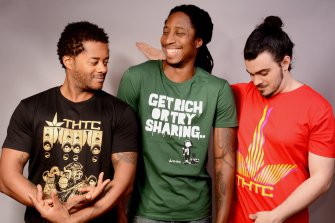 The Scribes are a multi award winning hip hop three piece whose unique blend of beatboxing, off the cuff freestyling and genre-spanning music has created a live show quite unlike any other on the scene today, with appeal ranging far beyond traditional hip hop fare.
They have consistently proven to be an impressive and engaging live act with 2019 festival appearances at Glastonbury, Wilderness Festival, Shambala, Boomtown Fair, Bearded Theory, Leopalloza, Maui Waui Festival, St Pauls Carnival, Tunes In The Dunes, Shambala Festival, Godney Gathering and many more and have toured extensively across the UK and onto Europe, including slots at prestigious venues such as Camden's Jazz Cafe, Cargo, Urban In Ibza, Bristol's O2 Academy, Peterborough Arena and Italy's Metaponto Beach Festival.

The Scribes are also proud winners of both the Exposure Music Award's "Best UK Urban Act" and the EatMusic Radio Award's "Best Live Act", and have provided original music for BBC and Channel 4 television, as well as having their latest album, which features Akil The MC (Jurassic 5) and Too Many Ts, being featured regularly on both national and local radio and media including BBC 1Xtra and BBC Radio 1 Introducing.

The Scribes are sponsored by independent, ethical and fair trade clothing company THTC (www.thtc.co.uk) alongside artists such as Ed Sheeran and Foreign Beggars and have released material with American record label "Kamikazi Airlines", based in LA and co-founded by Dizzy Dustin of legendary hip hop act Ugly Duckling, as well as UK based label "Reel Me Records" (Laid Blak).
The Scribes are hotly tipped as one to watch with live dates across the UK and Europe, as well as sharing the stage with the likes of Macklemore, Wu Tang Clan, Dizzee Rascal, Kelis, Rag N Bone Man, Example, Lethal Bizzle, The Wailers, Jurassic 5, Sugarhill Gang, KRS One, De La Soul, MF Doom, and Souls Of Mischief to name (drop) but a few, and are steadily establishing a growing following across the continent to add to their already significant fan base at home.