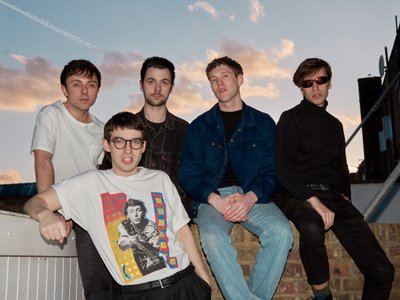 To say we’re excited about Spector is an understatement, the five-piece will be joining us on the Renishaw Stage to display exhilarating pure summer anthems.

Having opened their account with the Indie smash, call to arms "Chevy Thunder", Spector signed to Fiction Records and released their first album "Enjoy It While It Lasts" in the summer of 2012.

They have since been supporting the likes of the Kaiser Chiefs and Florence and the Machine and performing internationally in Mexico, Russia and Shanghai and at festivals including Reading, Isle of Wight, Benicassim and Coachella.

A sophomore album "Moth Boys" in 2015 featured lead song "All The Sad Young Men", one of their most successful to date with DJ Zane Lowe’s Hottest Record endorsement. 2019 has seen them back with the release of an astonishing accomplished new EP and new singles "I Won’t Wait" & "Simplicity". They rounded off 2019 with a huge UK tour.

So grab a buddy and cheeky cider and get ready to smile til’ your cheeks hurt because this will most certainly be, a joyful riotous gig.